HUNGER ON THE STREETS OF BRUSSELS: SANT’EGIDIO DOUBLES ITS EFFORTS FOR THE HOMELESS 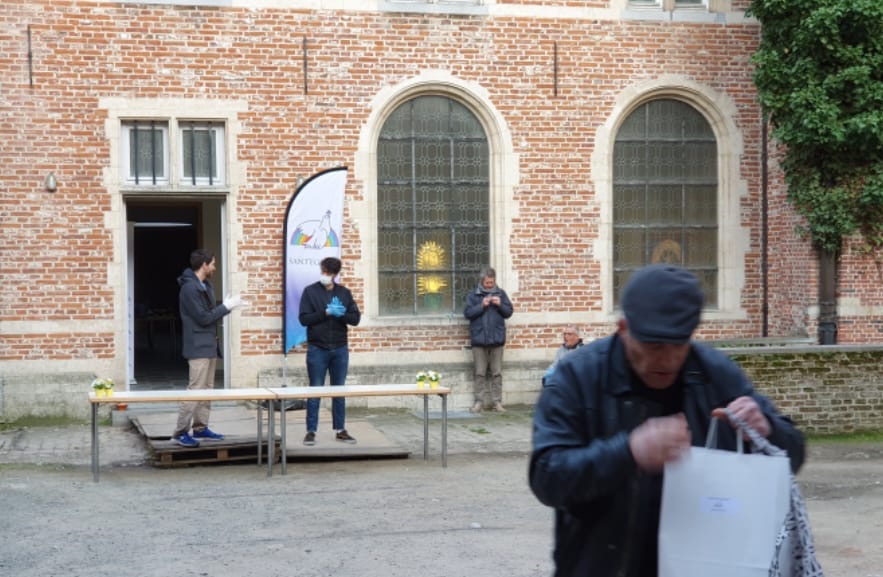 HUNGER ON THE STREETS OF BRUSSELS

It is the most vulnerable that are suffering the most during this lockdown period. That also applies to the homeless in Brussels. They’ve never had it easy, but what volunteers from Sant’ Egidio have noticed in recent weeks at Kamiano, a restaurant for the homeless, has been alarming. There are homeless people who say they haven’t eaten for two or three days, some have visibly lost weight.

Unexpectedly, hunger seems to have returned to the streets of Brussels and other major European cities. The closure of restaurants and bars and of a number of public services seem to be the main causes of this distressing situation. The fact that begging on the streets is no longer profitable during the lockdown is also a factor.

Faced with this situation, Sant’Egidio has decided to redouble its efforts. From now on, Kamiano  will open its the doors for the free distribution of food not only on Thursdays, but also on Mondays. It will do so for at least as long as the crisis situation lasts.

This extra effort has been made possible thanks to new volunteers who have appeared to lend a hand and to all kinds of help that has arrived. The King Baudouin Foundation has also jumped into the breach with an additional grant.

Kamiano Brussels is located on the site of the Church of Notre Dame aux Riches Claires (at the corner of rue des Riches Claires and rue Saint Christophe). The restaurant serves around eighty homeless people a hot meal every Thursday from 5 to 7 p.m., and now also Monday evening.

About fifteen volunteers provide a welcome and a service that are both respectful and friendly. Since the Corona crisis, Kamiano has mainly become a “take-away” service in order to respect all the necessary safety rules.

“Kamiano” is the name of the centers and restaurants for the homeless managed by Sant’Egidio in Belgium (Antwerp, Brussels, Liège). It refers to the name that the lepers of Molokaï gave to Father Damien. Volunteers from the Sant’Egidio Community, a worldwide Catholic movement whose center is in Rome, work for the vulnerable in more than seventy countries, and for building peace through dialogue.